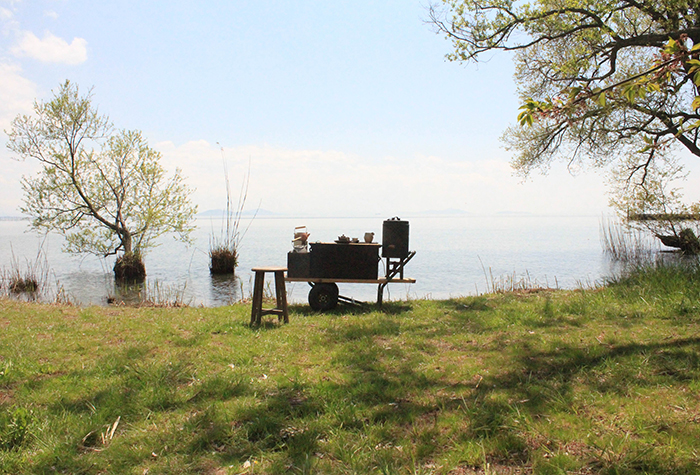 At Center for COSMIC WONDER, we are pleased to present Takashi Ichikawa’s “Chaguruma” (tea cart) exhibition.

For his participation in the collective exhibition held at the Wachi-yama Nogusa-no-mori in Kyotanba, Kyoto, Ichikawa created “Chaguruma No.1” a collection of tea ceremony tools to be carried to the fields and the forest. Since then he has created tea carts for various occasions, with “Chaguruma No.5” meeting its completion this year.

Amidst such course of events, he has also introduced works such as “Cha-rry (carry)” that takes a form similar to a trunk, and “Cha-unter (counter)” a counter that can be carried on one’s back.

These works are presented in various locations from Kyoto, Sendai, Taipei, Beijing, Yunnan, Wuhan, Xi’an and Inner Mongolia, where unique moments of tea are respectively held.

On the occasion of this exhibition, we will present works centering on Ichikawa’s “Chaguruma” including “Cha-rry” and “Cha-unter.”  Also throughout the duration of the exhibition, teaware made by Ichikawa will be available for purchase.

We look forward to welcoming visitors with the Chaguruma that resonates with the scene of ancient tea fields and the spirit of our present day as a means to reawaken our mind and senses.

*The artist will be attending on June 10

As a celebration for the opening of the exhibition, Takashi Ichikawa will held “Chaguruma (tea cart)” with served Higashi by Kousagisha, Kyoto.

In 2007 I met 李曙韻 (Mr. Lee) and became acquainted with Taiwanese tea. I was fascinated by the fragrant scent of Taiwanese tea, and through the beauty and freeness of Mr. Lee’s tea, had come to witness a new world of tea. Thereafter when Mr. Lee had moved the base of his activities to Beijing, I had the opportunity to encounter Chinese tea. The tea from the continent embodied a sense of richness, and was wealthy in variety. Learning about the profoundness of tea through the history of its culture such as its consideration as food, medicine, and connections to Zen and dissemination throughout the world, I found myself becoming more and more enticed by the appeal of tea. The creation of teaware is a difficult task. Nevertheless, the way one relates to tea through making its tools is indeed interesting, and I find it rewarding to think about tools from the practice of brewing tea.

When I encounter palatable tea I feel the urge to visit the place where it was cultivated. In time I had developed the desire to go to Xishuangbanna (Yunnan province) that is recognized as a place that produces enticingly tasteful tea in hopes to also encounter ancient tea trees. Thereafter I was granted the opportunity to visit an ancient tea tree that is over one thousand years old. The ancient tree had born very large tea leaves, standing tall high above one’s head. It was clearly different to any tea tree I knew. Observing the way it grew amidst the wilderness of the mountain, I channeled my awareness towards the long extending roots and rays of the sun that streamed upon it. The art of the tea ceremony was born amidst the history of tea, yet by sensing the presence of this ancient tree (the origins of tea), I was able to emotionally engage with “tea” in a different sense of mind. I am also very attracted to and interested in the aspects surrounding tea and its relationship with the moon (seasons), fire (sun), water (body), tree (leaves, roots), gold (day), earth (ceramics).

While developing my hopes of communicating the appeal of tea to many people through its tools, I had come to gain an interest in the “Song Dynasty Tea Ceremony Diagram” and the many images that I saw at the Hangzhou Tea Museum in China, which depicted literates enjoying tea outside. From these images I could discern people “seemingly carrying something curious” that looked different to tea boxes used in tea ceremonies, and through this experience I strongly realized this too, was one of the ways of enjoying one’s time with tea.

1999  Built a down-draft firewood kiln and a kerosene kiln

2000  Held a series of solo exhibitions throughout Japan

Built a firewood climbing kiln and a charcoal kiln

He is involved in activities such as “Chakakigoto” and “Chaiyuuki.” 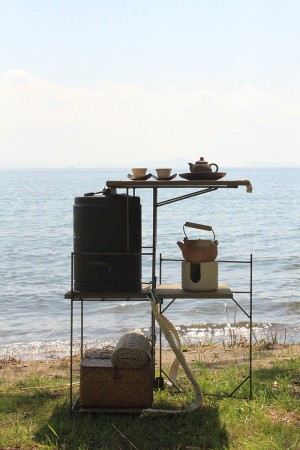