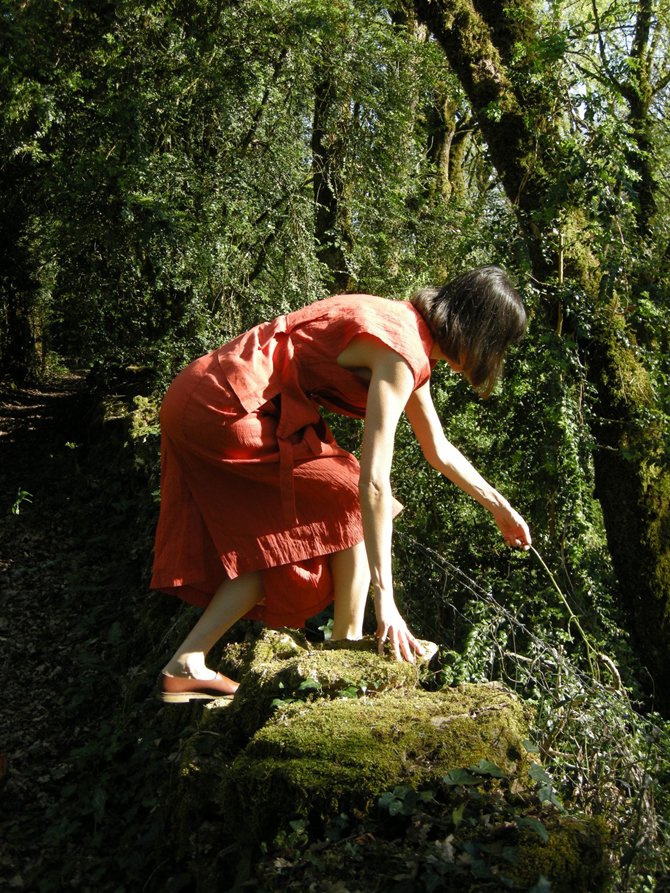 I’ve never liked industrial fashion nor synthetic fabrics. I always checked the labels telling what a piece of clothing is made of. However, during the last few years, I‘ve discovered another world entirely, fabrics manufactured without chemicals: organic cotton, ecologically produced wool; but also linen, hemp and alpaca. With these materials came my curiosity about the artisans who made them, people who spin, knit, weave, dye. I read some books on vegetable dyes and had an aesthetic jolt in discovering colors I hadn’t known until then. But I didn’t like the clothing produced by ecology-minded brands that used these standards. They were badly designed and cut, and most of them were ugly. There was a conflict in my mind between a longing for beauty and a desire for these natural materials and colors.

Last year, when I became familiar with the new direction taken by Cosmic Wonder, a dream was realized―even one that I hadn’t dared to entertain. I discovered the debut collection, First Light, wonderful clothing made by Yukinori Maeda using hemp, alpaca, linen and fibers I didn’t even know existed, such as choma, abaca, kudzu; and these fabrics were dyed with the colors I’d been dreaming of (like those obtained using charimbai flower, logwood, areca catechu, or lac). It was a revelation, and I was filled with a feeling of joy I had trouble containing. I often think of the adage saying that artists must live with their time, and that’s the impression I get when I look at the first two collections First Light and Natural Breathing. They have been created with a profound understanding of the period in which we are living; the beauty of this clothing was born at the heart of a world in disintegration. Yukinori Maeda has had the honesty and the courage to step to the side and avoid the already trodden path. Moreover, as rare as it is today, he has managed to live and create in perfect harmony with his thought.

Such an approach to envisioning clothing is one part of a whole that achieves a different approach to living, eating and taking care of yourself. It is simple but requires more work and more time, as well as knowledge and a certain knowhow. Such knowhow barely exists in some cases, buried as it is by two centuries of frenetic industrialization. The traces of it have to be rediscovered. It is the object of the research that Yukinori Maeda has undertaken. His aesthetic proposals rebuild the link between Japanese crafts and the production of materials in ancient times with a great variety of fibers, which were sometimes of a sacred nature. In addition to being made by the hands of a human being, such clothing has a meaningful history. Regardless of where else, the manufacture of clothing calls to mind a real nightmare (pollution, destruction, slavery) about which we are reluctant to think; but in this case it’s a pleasure to imagine each of the steps: the harvesting of plants or shearing of animals, the spinning, weaving, dying – all of them radiant images of life.

A few days ago, spring came, and I went picking wild herbs dressed in this wonderful red ensemble woven from ramie and hemp.

Translated from the French by Bruce Benderson