The New Face of Cosmic Wonder 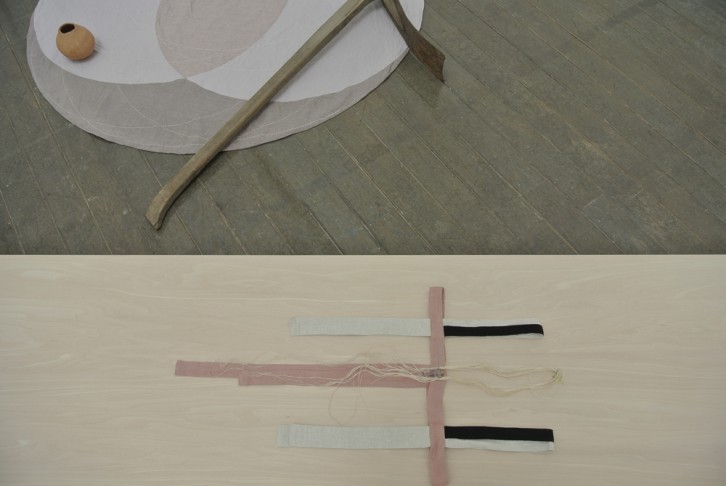 The day before the summer holidays on August 12th, I received an email from Cosmic Wonder. The message mentioned that the Center for Cosmic Wonder that had previously closed its doors in preparation for their new activities would open again on August 24th. The announcement email entitled, “First Light” had been accompanied by the following message, “Cosmic Wonder is heading in a new direction. In an effort to expand our awareness of our place in the natural system we focus on working with various natural materials, combining hand-woven fabrics such as organic cotton and linen, wool from sheep that graze on land free of pesticides and herbicides, pure Japanese-grown silk extracted from silkworms organically-raised on mulberry leaves, and natural plant dyes produced with traditional Japanese techniques. We find pleasure in making clothes with a sustainable vision that is both old and new at the same time. Weaving nature to reveal the root of the universe, the future and past give us their gentle light.”

On the previous day I had received some printed matter regarding their new collection. The cotton liner of an antique kimono is brought together in a patchwork manner to create a pale blue dress. Its appearance was like that of a surface of a beautiful lake with an allure that draws one to its depths. A vest that could be gently slipped over one’s shoulders embraced a light an airy ambience similar to that of hemp, yet had been crafted with the fibers of a different plant. Its shape seemed to subtly implement the eminence of traditional clothing, however it did not relate to a particular ethnicity. Furthermore, it maintained a high designability that allowed it to be worn comfortably within the urban settings of the city of Tokyo.

These clothes so to speak, are ‘new items from their autumn-winter collection.’ Over the past year Cosmic Wonder has evidently expressed a strong desire for change. As an observer whom has continued to look upon their efforts of realistically implementing this transformation, I consider this collection as an extremely meaningful and evolutionary step towards the future of their practice. Their present activities are consistent with the current fashion system, yet at the same time suggests an inclination towards sustaining their individual concept of producing clothing. As a result, based on a firm intention of developing this new notion of change, their latest practices are part of a radical approach that considers restructuring the organization and renewing existing ways of working.

In 2014 an exhibition entitled, “You reach out –right now- for something: Questioning the Concept of Fashion”, took place at Art Tower Mito and later travelled to the Marugame Genichiro-Inokuma Museum of Contemporary Art. Their work that was presented in these two museums had also reflected this process of change. Of all the works and installations by various creators within this group exhibition, what had particularly seemed unconventional amidst the context of fashion was the space by Cosmic Wonder. Numerous pieces of circular fabric had been dispersedly placed within the space accompanied by objects such as old farming tools and tableware, ceramics, stones, and mirrors. Various cloths from beiges, pinks and greys with delicate and distinctive hues dyed with natural plant dyes were connected to form a circular fabric that is then embroidered with sashiko hand stitching. During the installation I had learnt that the hands of a local group of women partaking in traditional crafts in the Miyazaki region where one of their staff resided, had embroidered these fabrics. She had mentioned, “I would teach the ladies how to make clothes, and in exchange they stitched and created these fabrics for us.”

Looking back, it had been in the summer of 2013 that Yukinori Maeda presented his specific idea for these exhibitions that were to take place from the early spring to autumn of 2014 in contemporary art museums located in two of Japan’s provincial cities. The city of Mito in the Ibaraki prefecture, and the city of Marugame in the Kagawa prefecture. The idea had been an innovative one, “a one day only performance (and fashion show) with a new concept entitled ‘Cosmic Wonder Restaurant’, and the space in which it was to be held.” The concept of a ‘gift economy’ had been at the foundation for this idea however, as usual, Maeda ceased to provide any further explanation. A month later, Maeda presented some film footage and photographs of their performance that had taken place in New York in September. A beautiful, natural, and new sensation had permeated these images. Despite being unable to envision the work’s completed form, we (the curators of Art Tower Mito and Marugame Genichiro-Inokuma Museum of Contemporary Art, and myself, the author of the book “Kakucho Suru Fashion (Expanding Fashion)” that had been the origin for proposing this exhibition), had begun moving in the direction of “realizing” this idea.

The starting point for the exhibition that begun on February 22nd, 2014 at Art Tower Mito had been to place a series of circular fabrics within the space as had been done for the performance in New York. In the instance of this particular installation however, the fabrics were remade in correspondence to the exhibition room and were accompanied by old farming tools in consideration of the work’s presentation in Japan. Various events were organized at the weekends throughout the duration of the exhibition to attract further visitors from Tokyo, and on Sunday that had been the final day of the exhibition, the much-anticipated ‘Cosmic wonder Restaurant’ took place. It was indeed a magical day. On that sunny day upon the lush green grass of May, ‘lunch’ was served in exchange for the ‘gifts’ that the visitors had brought with them. The food that was served was both beautiful to the eyes and appealing to the palette, and had been created by carefully selected ingredients by the hands of Kyoto’s culinary artisans. Music of chance operation orchestrated through Sho (Shinto Flutes), stringed instruments and live voices, performances, and the act of sharing a meal. Sculptures such as fabric and a circular mirror. The performers of music and dance as well as Yukinori Maeda and the staff had all worn garments from their latest ‘autumn-winter’ collection, consequently presenting them to the public for the first time. In other words, this particular scene that took place on the final day of the exhibition within the museum’s garden, had essentially been the setting for the presentation of their latest works (and as such, it could also be defined as a ‘fashion show’).

After the presentation in Mito, the exhibition travelled to the Genichiro-Inokuma Museum of Contemporary Art (also known as MIMOCA) in the city of Marugame in the Shikoku region. For this exhibition that commenced on June 14th, Maeda oversaw the installation on his own in correspondence to the venue space. The details had been reconsidered in the instance of this second installation. The various objects, glass jars and natural stones such as crystals that were gathered at the performance in Mito as well as the kimono that Maeda had worn on the day of the performance had been added to the space.

When observed closely, one notices that the circular fabrics have been embroidered with geometric patterns appropriating the sashiko stitch technique. Among them had been those that had been hand stitched by Maeda himself. Maeda smiled to me as he said, “My thumbs were very sore (laughs),” yet as there had been a point just a year ago on a particular summer’s day when he had stated, “I’m going to stop making clothes,” this smile, especially for myself as a continuous observer of their practice, had been a very pleasant one.

According to Maeda, what had best represented Cosmic Wonder’s new perspective was the installation shown at the “You reach out –right now- for something: Questioning the Concept of Fashion” exhibition. If you look at their room very closely and carefully one can see that there are indeed several garments of clothing, yet surely those who first notice the presence of ‘clothes’ within the space are a mere minority. The circular fabrics, tree branches and crystals, antique tableware is what first seem to meet the eye. The clothes are there, inconspicuously placed amongst the several objects, farming tools, and plain wooden tables. The installation symbolically indicated an alternative way of looking at daily life in opposition to a general urban centric lifestyle that is inclined towards a unilateral system of consumption. In other words, it further signified the production of materials for food and clothing as that which is nurtured within their day-to-day lives through their own hands.

“For the clothes that we create from now on we hope to further expand upon the elements that we had previously incorporated into our practice, focusing on the use of natural plant dyes, and materials centering on more traditional production methods including hand-weaving and spinning. In order to do this there are plans to relocate our entire studio to the Kyoto countryside, and therefore we are currently making gradual changes to our organization.” Intentionally distancing their base from the center of commerce and trade as an almost family-run design team with fewer members. On the evening of the opening at MIMOCA, Desiree of Bless and Yukinori Maeda had been in a serious conversation with regards to the possibilities of such ‘change.’ Bless mentioned the name of fellow German designer Bernhard Willhelm, who had once relocated his base to Mexico and currently works in LA, as a designer whom has already put this idea into practice. The act of placing oneself at a distance from cities that are the center of production and trade and relocating to rural areas, is something that has already begun to take shape in the fashion industry. However, this practice in Japan is not limited to the world of fashion, but is a new movement that has become more pronounced across various fields since The Tohoku-Pacific Ocean Earthquake.

Cosmic Wonder’s sense of uniqueness is founded upon an attitude that strives to bring forth elements of change that relate to all aspects of their daily lifestyle by way of establishing a new organization and ways of working, whilst simultaneously continuing to produce clothing in accordance to their personal philosophy. One could question their drastic desire for ‘change’ especially during this difficult period and at a time when their practice has gained such great success on a business level. Yet, despite my putting forth such a question that could likely be asked by an announcer on television, there are no specific episodes or clear responses to be given. As in the way in which we nonchalantly partake in each and every act of our daily lives, their choices are very often implemented as a result of various emotions and sensations that render explanation in words inadequate.

What I recognize as being above all important, is that even though one were to have no knowledge of the philosophy behind their works or the fact that they are currently in a period of transition, the moment you look upon their clothes and put your arms through the sleeves there is a new and sensational clothing experience that instantly embraces you. It is essentially, the high degree of perfection itself to which these clothes have been created. The clothing they create maintains a high quality design whilst at the same time provides a feeling of comfort through the colors and textures of the material, and establishes itself as fashion upon the very fine zenith of an edgy balance between style and sensation. That is to say, these are beautiful clothes that have been created with beautiful materials, and are replete with a new sensation of design. Despite our current times overflowing with an abundance of clothing, this fact alone is what makes them exceptionally one of a kind. 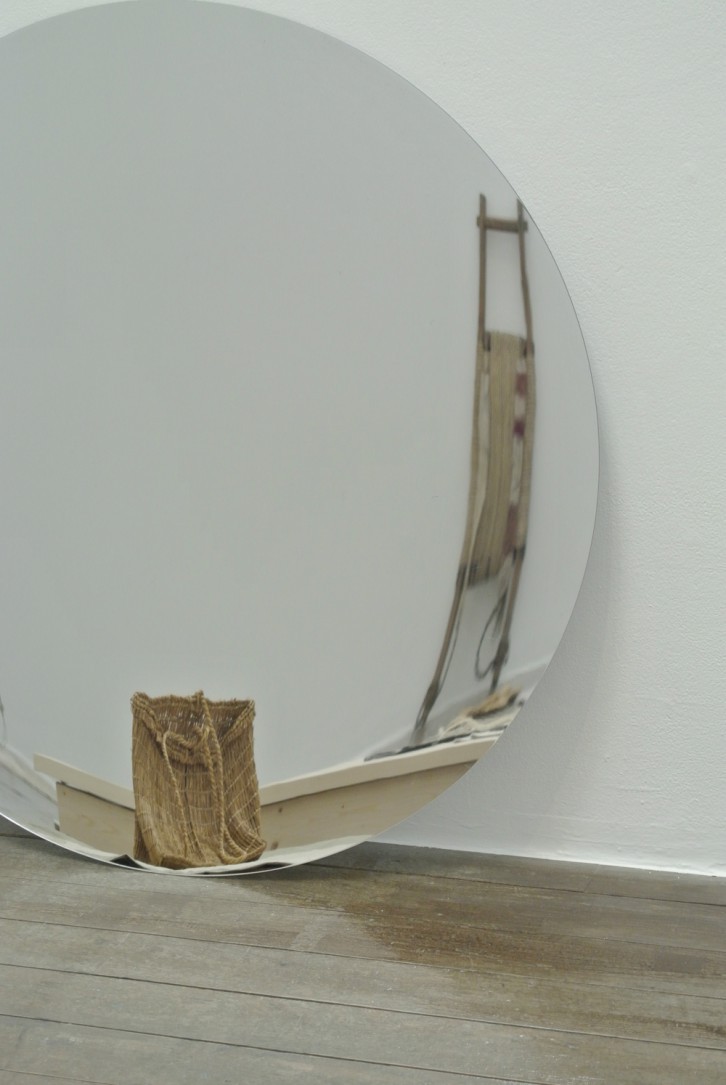 Exihibited in “You reach out – right now – for something : Questioning the Concept of Fashion”
at Mito Art Foundation, 2014