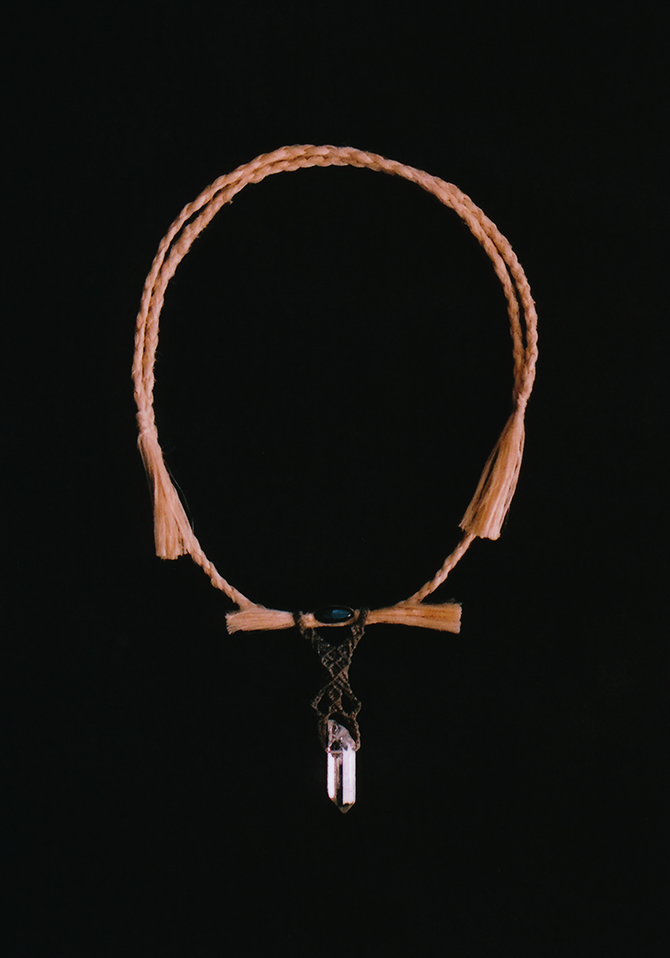 I am making jewelry using minerals, old materials that passed the time.

That piece produced by Mother Earth is a condensation of thousands, tens of thousands of years time

I wear a part of the earth

It started as an amulet that protects us from foreign enemies

From there it became a decorative item until the present age

It was to measure differentiation from others to dress up

How was the meaning of things originally born

It was because the relationship between things was meaningful

It seems that its relationship has diminished in this modern era

I want to regain that relationship again

I an making it with such feelings

One braid knitting is time volume

I can put it in one braid

To make it look more beautiful

The strength seen in the roughness of the gemstone is also

The translucency which looks delicate as it seems to be broken

The existence which combines the properties of both polarities

Melt the gold and make the mold and put the stone

It will sometimes walk together the life

It is not gorgeous

Having a place where people and objects are connected

I moved the residence to the countryside

Produce in a place surrounded by nature

Modern values of discarding to destroy when it gets old

You can still use it if you add a little

I’m deeply aware of Japan while traveling the world

Distinctive values such as rustling and lonely

We recognize the difference between them and hybridize in various ways

As a place to connect people and people,

I will continue to learn interesting and learn from now

I seriously dream about a bright peaceful future

And I want to have a love and a passion

We are pleased to present “Utsushiki” by Yasuhide Ono at Center for COSMIC WONDER.

The delicate ones, mainly minerals will connect the earth, the universe, and the sprit world here, contain what is to be worn by the ancient wisdom and what is intended to build the future and an obvious intention.

In addition, Ono made a space called “Utsushiki” in the village located between Fukuoka city and kita-kyusu.

It was dotted with works produced by Ono, old tools brought back from Japan and India, warm clothes of hands, proposing delicious food, Ono’s workshop, and the lives of his own family it depends on space, A space of “Utsushiki” appears together with Yasuhide Ono at Center for COSMIC WONDER.

*The artist will be attending on November 16, 17

The performance of old instruments by Mirai Matsumoto and Maika of baobab in Oita prefecture.

Started the career of accessory making in the world wandering

Warmth of handmade without the same thing as one  in the world, to convey the charm and history of natural stone, he make it with goal to be involved in everyday life of as many people as possible

From hand to hand, to that person’s special things

Emigrated to Miyawaka-shi, Fukuoka prefecture in 2014

Ayurveda leaning at a hospital in SriLanka

Expression of Old instrument, Modern instruments, Irish, Ancient music, Folk with free arrangement and style.
We are transmitting the air and the season moving through our days, the scenery and feeling we have found in the countryside life as.
The album made by independent production records a long seller in an indie scene.
Every summer, in the forest of Katerina, we organize the whole forest itself, sponsoring the music festival “Sing Bird Concert” which forcuses on the integration of the natural environment with people, music, art and living.
It collects a lot of sympathizers and it is the core of expressive communication from the area.
+ Share